Anthony Fauci; Mad Scientist Or Con Man? This week live on Business, Politics, and Lifestyles – Saturdays 9 AM on WCRN 830 AM.

This week live on Business, Politics, and Lifestyles – Saturdays 9 AM on WCRN 830 AM.

9:30 AM – Stephen Moore, is One of The Founders of The Committee to Unleash Prosperity. Stephen formerly wrote on the economy and public policy for The Wall Street Journal. He is the Distinguished Visiting Fellow, Project for Economic Growth, at The Heritage Foundation. Steven is also an economic contributor to FreedomWorks. We will be discussing his Governors Scorecard.

10:00 AM –  Bill Gertz is a national security correspondent for The Washington Times. He has been with The Times since 1985. Bill is the author of eight books, four of them national best-sellers. His latest book, “Deceiving the Sky: Inside Communist China’s Drive for Global Supremacy,” reveals details about the growing threat posed by the People’s Republic of China. He is also the author of the ebook “How China’s Communist Party Made the World Sick.”. Bill also writes Inside the Ring, a weekly column that chronicles the U.S. national security bureaucracy. 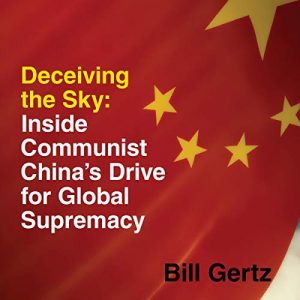